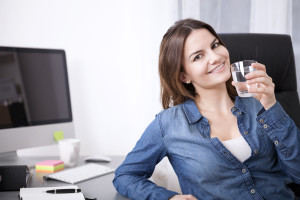 Why leaders should drink more water

If someone handed you the silver bullet, a substance that could make your brain less fuzzy, your stress more tolerable, and your health better overall, do you think you would you use it?

I’m guessing that most people would say that they would if the substance were legal and didn’t have nasty side effects.  What if your doctor agreed that the substance was good for you?  Would that clinch it for you?

Would that convince you to drink 64 ounces or more of water each day?

It seems like a slam dunk but while water is about the closest thing to a cure all that I’ve found, most people don’t drink enough of it.

I admit that I am a fan of British TV.  One of my favorite shows is Doc Martin.  What Dr. Martin Ellingham (Doc. Martin) lacks in charm he makes up for in an uncanny ability to diagnose even the most obscure conditions (this IS television after all.)  At the opening of Series Two, the doc sees a patient early one morning that is apparently quite lucid if a bit irascible (a bit like Doc Martin himself.) Yet the patient’s son is convinced that his mother is sliding into dementia and, indeed, when the doc sees her in a muddled state one afternoon, he himself has to wonder.

Being a master of the clever diagnosis, however, the doc discovers that after the early morning hours of each day, the woman does not drink water, and he determines that her confused and disheveled condition is due to dehydration.  He makes her drink a glass of water and, presto, her son has the mother he’s not had in years; she becomes lively and social, and all is well in the world.

This might be a dramatic example and, as a layman, I don’t know whether afternoon dehydration could cause the bouncing dementia-like symptoms depicted in the TV show or not.  But I do know that the experts tell us that we should drink plenty of water and I have seen plenty of evidence of the benefits.

According to the Drinking Water Research Foundation, adequate amounts of water helps regulate our body temperature, carries nutrients and oxygen to the cells, and helps our joints and organs do their jobs.

So why talk about drinking water on a leadership blog?

Proper hydration is critical to leaders because water is also beneficial for cognition, stress tolerance, and mood management, all of which are critically important to leadership performance and sustainability.

According to Hydration for Health, an organization devoted to raising “public awareness of healthy hydration”, our brains are 75% water.  Given this, it makes perfect sense that dehydration would be detrimental to the functioning of our brains.  Indeed, studies that looked at ‘fatigue, mood, choice reaction time, short- and long-term memory, (and) attention” found that just 2% dehydration is enough to negatively impact performance.

Leaders often spend their day-to-day lives responding to a variety of stressful situations.  People who are properly hydrated have been shown to be more focused, calmer, and just plain happier than people who are dehydrated.

How much water should you drink?  It’s not as simple as the old 8 x 8 rule (eight 8-ounce glasses per day.)  Since hydration is measured as a percentage of overall body size, the amount of water required for a 120-pound woman will be different than for a 180 pound man.  According to WebMD, exercise intensity and health condition matter too.

Hydration for Health has several handy tools including a hydration calculator for determining how much water you should drink based on your size and physical activity.  (For some reason, the tool asks for your country and the United States is not one of the choices – I can’t explain that.  I simply chose the UK.)