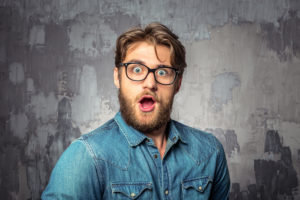 This week’s US Presidential election represented one of the most stunning political upsets that most of us alive today have ever witnessed.

Regardless of how you voted or whether you were elated, despondent, or somewhere in-between with the result, most people were genuinely surprised when they learned that Donald Trump was to be the 44th person to serve as the President of the United States of America*.  Even people who voted for him were surprised.

I’m not going to address the result of the election itself – this is not a political post.  But I do want to talk about why the results were such an extraordinary, staggering, remarkable, astonishing, breath-taking surprise. (I don’t think that I am exaggerating my use of adjectives here.)

After pondering it, I realized that the surprise election result is further evidence of our listening problem. And it is the same listening problem that a lot of leaders have in their own organizations.  I routinely encourage leaders to learn to listen and ask questions, lest they find themselves facing a big surprise.

Most leaders tend to think that they do listen.  Some will say that they listen to “anything that makes sense” or is “reasonable.”  But, they are the sole determinants of what is reasonable.  The problem is that most people think that their own points of view are reasonable, even if you don’t. And it seems that many people, even leaders, shut down or mount a defense as soon as they start to hear something that they don’t agree with.

But the real trick is to mine it. Find out with real questions, not snarky ones, what people think.  Instead of telling people what you see as obvious, learn why people experience things the way that they do.  Have compassion for their point of view and encourage them to explain.

If you are the leader, you may have to do this repeatedly, because the power in your position can cause fear in people who will then be reluctant to believe you.

When people are too afraid to attempt honest dialogue for fear of being shut down, labeled, or worse, they don’t stop believing their own point of view.  Instead, they simply go about their business, do what they are going to do, and stop trying to talk about it.

When that happens, the entire organization is in trouble, whether it’s a business, a charity, an agency, or a government.  Leaders MUST genuinely seek opportunities to listen to every voice, and understand where it is coming from, even those that they initially disagree with.

Remember that listening does not mean giving up your beliefs.  It means suspending your beliefs long enough to tune a thoughtful ear to the dissenting voice, taking in what it has to say, asking genuine questions, and making every attempt to understand the speaker’s position as they experience it.

In doing so, you will find yourself better informed, in possession of critical data you may not obtain otherwise, and most relevant for today’s topic, you will experience fewer surprises.

*By the way, I know that most people credit Donald Trump as being elected to be the 45th president, but such lists count Grover Cleveland, who served two non-consecutive terms, twice.

“Through coaching, I have gained clearer thought processes and I am able to communicate my needs and my goals more clearly. Almost daily, I refer back to one of the assignments that Marie gave to me and I remember what I am really working towards. I have gained a new approach that allows me to give off a vibe of confidence.”
Rosaria Guzzi
Director, Conference and Event Management, Wellesley Information Services