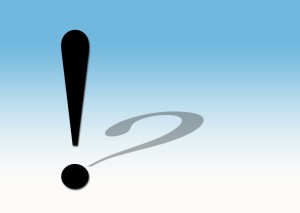 What we know for sure isn’t always right

Sometimes, we think we know things.

And because we humans – even the leaders among us – aren’t always as rational as we’d like to be, we often make thinking errors that cause us to believe that we absolutely know things, when in reality we don’t know them at all.  This happens especially with emotionally charged issues.  It also happens a lot when we make assessments about what other people think or feel.

Most of the time, we suspect or fear these things but we seldom know them.  There are lots of ways we convince ourselves otherwise.

We know what we would be thinking if we exhibited certain behaviors and we assume everyone thinks like we do.  Maybe you shy away from having direct conversations with your staff about areas in which they need to improve.  You’ve found that just making small, sometimes sarcastic, comments when someone does something that you don’t like helps you feel like you’ve addressed the issue without having to tackle it head on.  After all, they get it, don’t they?

So when your boss, Mike, walks by after a particularly difficult meeting with the marketing department that you actually thought ended up okay and says “Way to go.  Aced that one didn’t you?” you immediately think “Yikes, I thought I did well but, obviously, he doesn’t think so.”

But Mike was being sincere.   He watched you painstakingly make your case and the marketing director eventually agree to at least test your campaign and he was impressed by your calm perseverance and cool rationale.   But convinced that sarcasm is a key tool that managers use to communicate with staff, you now feel sure that Mike didn’t appreciate your efforts or your style of getting things done.  And that seems to fit with what you already suspected…

Confirmation bias is another reason.  That’s our tendency, once we believe something, to seek out and interpret data in a way that confirms it and to disregard information to the contrary.  Sometimes we do this deliberately, for instance when we read books that treat our chosen political candidates favorably and ignore ones that treat the same candidates unfavorably.

Other times we do it completely unconsciously.   Your misunderstanding of Mike’s intentions is an example.  So is our tendency to notice the good work that ‘good’ employees do and the ‘bad’ work that bad employees do.  We notice more and more evidence that supports our point of view until we know something for sure.

Regardless of how we convince ourselves, knowing can be a bad thing.

“It’s what we know that keeps us from learning.”  Claude Bernard

Recently, I asked a colleague about his experience at an experimental work lab that I was considering attending.  He said “The very essence of it is experimentation… For me what works best is when the experimenter doesn’t know if the experiment is going to work… It doesn’t work so well when someone is coming along to confirm something they already know.”

That’s because what we think we know keep us from learning.  Not knowing opens up possibilities to learning.

“Marie is a true Subject Matter Expert in a field that I would have believed defied that descriptor. She provided (and continues to provide) useful career advice that is both timely and effective. I trust Marie's advice for my career more than anyone else I have met. Truly an exception to the mean.”
Joe Shipani
Vice President of Business Development, Cimation