To make things happen, focus on the future, not the past 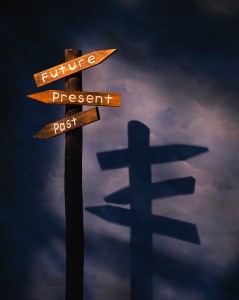 Propensity to talk about the past.  Folks do it at all levels of the organization.  They get together to talk about how to implement a new plan or how to bring a new product to market and they end up depressing their own creativity (and spirits) by focusing on extended discourse about all the failures of the past.

Re-framing the past for the future.  Confucius reputedly said “Study the past if you would divine the future.”  It is true that there are lessons to be learned from the past.  I am reminded of this by at least one person every time I speak to leaders about focusing on the future in their conversations.

The problem is that we get stuck talking about the past and don’t get to the part where we make things different in the future.  To avoid that, I’m suggesting that we re-frame our concerns about the past as possibilities for the future.

When we focus on the past, we get stuck there.  When we learn from the past to make the future better, we re-frame our past concerns as future possibilities.

“Marie is expert at making people feel comfortable, a skill that can’t be understated when you’re talking about exposing organizational pains.  Her ability to put every level of employee at ease is really unique.  Working with both executives and administrators she steered us towards making our organization a better place to work led by a better team.  It’s no longer enough to rely on traditional philosophies for conducting business.  Marie’s use of new methodologies and instructional techniques helped us respond to issues that lay dormant and we’re a better organization because of that.”
Richard Sergi
Executive Director of Brockton Housing Authority