The 7 Habits live on 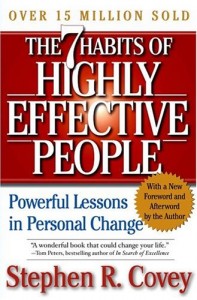 Bestselling author Stephen R. Covey died this week of injuries that he sustained from a bicycle accident in April.  (Official Press Release.) We know the great personal loss of his passing to his family and those who knew him.  It is a great loss to the rest of us as well, who benefited from his common sense wisdom through his writing.

Habit 1:  Begin with the End in Mind

Habit 1:  Seek First to Understand, Then to Be Understood

“7 Habits…” was one of the first business books that I ever purchased and I still have my original 1989 edition.  It was the first book that I featured for Leaders in the resource section of PeelerAssociates.com and it is one that I have recommended to clients time and again.

Ironically, the book isn’t really about business at all.  It’s about effectively managing one’s self and one’s relationships with others.  But that’s exactly what makes it a great leadership book – these are the things that great leaders do well.

The 7 Habits live on.  Despite Covey’s passing, I know the 7 Habits will live on because they are timeless and they are relevant.  For Leaders attempting to achieve success and satisfaction, the 7 Habits are essential.

If some of the concepts seem cliché now, that’s because “7 Habits…” was (and still is) so widely read.  The concepts have been so often repeated that they have become a part of standard language.

The irony is that while we’ve come to think of the habits as common sense, many leaders still struggle to turn them into actual habits.  That’s another reason “7 Habits…” will live on.

“Marie is 'provocative' in the most constructive sense of the word. From our work together, I have learned that I am entirely able to change even some longstanding habits. I am better for having been coached by Marie.”
Dennis Carman
President and CEO, United Way of Greater Plymouth County