Talking about what matters 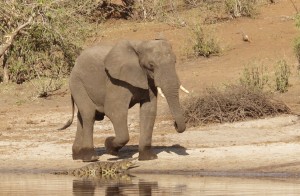 Last night I had a peculiar dream.

I was driving on a wide, two-lane commercial road near my home.  Suddenly, in front of me, there was an elephant.  I mean a real honest-to-goodness live elephant.  He was in my lane, staring straight at me, and he did not look happy.

As I slowed down and shifted into the left lane to go around the elephant, he decided to move into that lane as well, maintaining his position directly in front of me.  Then I started to move back into the right lane again, and this time he stayed where he was.  But, I found myself hemmed in as a car that had been behind me attempted to go around me on my right.

What was wrong with the driver of that car?  Could they not see that I was attempting to avoid an elephant in the road?  Why could they not just hang back while I dealt with this problem?

I wanted to get around and far enough away from the elephant so that I could be safe while I called someone to report it.  But to my dismay, as I again tried to move forward and to the right, this time behind the car that had just passed me, I found myself squeezed between the elephant and the stream of cars which were now passing on my right.

I believe this is about the time I woke up.  Immediately I wondered what an elephant was doing in the northbound lane of Route 53 in Hanover.  Just as quickly, I wondered what in the world such a dream could mean.

I don’t know what the dream meant. But, this morning, my elephant in the road reminded me of a concept that I often speak about with leaders, particularly leadership teams.  That is, the “Elephant in the Room.”

The elephant in the room.  Surely, you’ve heard of it.  It’s that big huge “thing” that everyone sees but no one will talk about, or even acknowledge.  Like my elephant in the road, it’s an obstacle.  It’s in the way and needs to be dealt with.

But often, people simply pretend not to see the elephant.  Dealing with it seems too hard – It seems easier to just pass it by like it’s not there.

Why we ignore the elephant.

The problem with ignoring the elephant.  While we are busy looking the other way, of course the problem doesn’t go away.  Usually, it gets louder and more destructive.  While we avoid discussing the problem:

Do you have elephants in the room that you don’t talk about?  Do you simply drive around them and pretend they are not there?

Or do you tackle issues with courage, making sure that you take personal responsibility for identifying those things that must be discussed for the good of the organization?