Speaking your truth with courage and compassion

Most of us learned at an early age 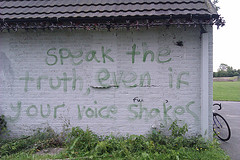 not to let everything that pops into our heads come out of our mouths.  Thinking before one speaks is generally a good idea.  It can keep us from saying things that we will later regret.

But can self-censorship go too far?  Absolutely.

Do you find that you often don’t speak up because you believe that:

If you answered yes to any of these, then it’s likely that you aren’t speaking up enough.  You aren’t telling the truth.

Being a leader and being silent are diametrically opposed.  It’s easy to let things run on status quo.  But being silent doesn’t move your organization forward and it won’t make you successful.

This post is Part Four of a five part series on what you can do to make 2014 your best year ever.  In part one, I introduced four things that you can do differently this year.  In part two, I talked about setting a clear intention.  In part three, I suggested that leaders ask for help.

In this post, I want to implore you to tell the truth … to be courageously authentic.  According to Bob Anderson of The Leadership Circle, courageous authenticity is a “leader’s willingness to take tough stands, bring up ‘un-discussables,’ and openly deal with difficult relationship problems.”

To speak your truth productively and effectively:

If true leadership is about having a purpose, communicating a vision, driving towards a goal, and being decisive, isn’t speaking your truth with courage and compassion a fundamental necessity?

“I now know how much more quickly my goals can be accomplished by using a skilled coach. I was challenged in a way that was firm, but not aggressive or harsh, to think and peel back the onion. Thank you, Marie, for one of the most positive personal/professional experiences in my life.”
Katie Morey
Vice President, Ocean Spray Cranberries