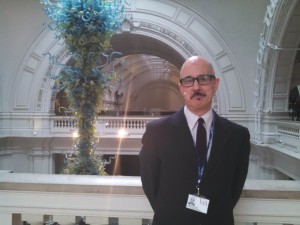 My day at the museum: Coaching leaders to see with a different lens

I’m in the UK and I had the most wonderful day yesterday. I met and spent time with a most generous colleague who not only told me about his work but allowed me to experience it firsthand. Given that so much of my work is about helping leaders see things with a different lens, it was an amazing opportunity to do so myself.

James Wilson works with a Leadership Development program for leaders of creative enterprises, i.e. theatres, symphonies, museums, etc., at the Victoria and Albert Museum in London. As we wandered the galleries, he asked questions about what I was noticing. He also asked questions about what he noticed that I noticed but that I didn’t notice that I noticed. (Did you follow that?)

Like any good coach, James asked powerful questions … those questions that are simple, open ended, and without expectation of “THE ONE right answer.” He also gave simple assignments, designed to provoke and inform. What do you see? Pick something that speaks to you. Tell me about this. 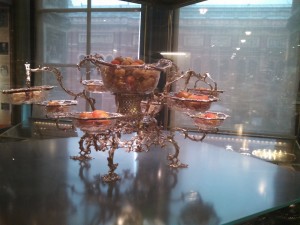 The first piece that I stopped in front of was at the same time lovely and delicate as well as a bit fierce and menacing. The detailed, almost organic design of the silver bowl with numerous smaller suspended bowls reminded me of the scary trees in the forest near Hogwarts, the fictional school of Harry Potter. I don’t know the name of the piece but James and I dubbed it “Whomping Willow” and continued our journey.

We discussed the notion of looking without seeing, noting how often leaders, especially when faced with what appear to be the same people doing the same things every day, STOP seeing. We have eyes, we look around and, most of the time, we avoid running into objects and people but we don’t really see because we assume that we already know.

We stared at tapestries and talked about the need to cut through leaders’ ‘expert’ veneers and help them approach themselves, their organizations, and their people as learners.

At one point, as we wandered past a costume display in the Theatre and Performance galleries, I did a double take that I didn’t even notice. But James caught it, stopped us, and wanted an explanation. It was the apparent incongruity of a jumpsuit worn by Mick Jagger amidst a series of what appeared to be military and seafaring uniforms that had startled me. But what struck me wasn’t my reaction to the incongruity but rather the fact that I didn’t notice my reaction until James stopped me and got me to talk about it.

As we parted and said our goodbyes, he gave me an assignment. Unfortunately, I went off to meet another colleague and could not quite precisely recall the assignment when I returned. (That happens all the time with my coaching clients so it never hurts me to walk in their shoes.)

But I set off with what I could best recall the assignment to be which was to “Find something that I wasn’t meant to find”… or something like that. I’m not sure it matters, (although James might disagree), as it’s not so much the question as where it leads you that is important. So I decided to wander and assumed that the right question and the right answer would emerge when it was supposed to.

I quickly got lost (holding England’s treasures, the V&A is truly a massive place), came upon a large medieval circular staircase and decided, “This is it.” However, as I photographed it from various angles, I realized that taking the easy way out, I’d chosen the first really cool thing (in my eyes) that struck me. 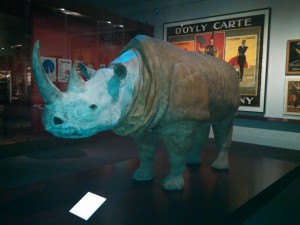 A good bit of wandering later, much of it through galleries James and I already explored, I came upon a life size baby rhino, again in the Theatre and Performance galleries. I might have missed the rhino (again) had a lone gentleman, quite captivated by it, not gently engaged me in a conversation about it. We chatted a good bit, considering that at least one of us is an introvert not prone to striking up conversations with strangers in museums.

We talked mostly about the rhino, but also about accents (he’d pegged me as American but couldn’t figure out which area. It’s a common problem, even in the States). He told me that there were two men inside the rhino which I misunderstood to mean, “there are two men inside it right now,” and I accused him of teasing me. He showed me the trapdoor on the underside of the rhino where men who operated the beast on stage climbed inside. We commented on how realistic it looked and, out of deference to the “Do not touch sign,” caught ourselves just before we simultaneously reached out to touch the hide.

As it became time to move on, I took a good look at the man, not the words, not the gentle manner, not the almost shy but engaging demeanor, but the man on the outside. I noticed a dirty coat and other signs that made me wonder who I’d been speaking with, why he was in the museum – which by the way does not charge admission and is free to all – and if, frankly, he had a home. I’ll never know. We quietly said goodbye and walked in different directions. But I was moved by our conversation.

So, whatever the actual assignment was, I think the rhino was the piece that James had sent me off to find … or maybe it was the man.