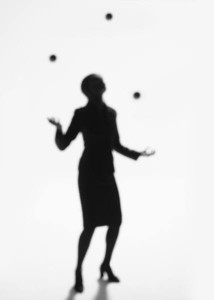 Stress is inevitable.  Deadlines, decisions, presentations, staff issues, the economy, and much more conspire to make leadership a stressful endeavor.  Fortunately, we can choose how to deal with stressful circumstances.  Unfortunately, leaders often choose multitasking.

Multitasking, the logical choice.  When overburdened leaders feel stressed out, the first coping mechanism to kick in is multitasking.  The logic seems sound.  After all, I can finish my work in half the time if I do two things at once, right?

Unfortunately, it just doesn’t work.  Our brains are not wired for multitasking, so the closest thing that we can do is switch back and forth between tasks.  Sometimes, we can start a task and start someone else on another task and let them do their thing while we go work on our task.  Then, a little later, we check on them.  If everything is okay, we go back to our other task again.  That type of switching – if the time intervals between switches are sufficient enough – might be effective.

However, when we multitask we often do something a little different.  Typically we try to monitor email while we write a report.  Or we do a webinar while we complete a project.  Or we tell someone, “Go ahead, I’m listening.” while we continue working.

The cost of multitasking.  This kind of switching doesn’t work; we are simply darting back and forth between two tasks and doing neither one particularly well.

In addition, according to Harvard professor, Clifford Nash, WGBH’s Frontline®, there is a ‘task switch cost’ associated with shutting down one part of the brain in order to fire up another part of the brain for the second task.  All this switching is much less effective and it’s costly.

Only part of the cost of multitasking is reflected in additional time and lesser performance.  Multitasking also has a stress cost.  In a study performed by Hiltraut Paridon and Marlen Kaufmann, and reported in Europe’s Journal of Psychology, drivers (simulated) were asked to also perform simple tasks, such as removing tissues from a package or dialing a number on a cell phone.  Drivers who were asked to multitask experienced significant mental stress and had more difficulty staying in their lane, compared to those that were not asked to multitask.

When study participants were asked to perform a word identification exercise while listening to text being read, the multitaskers had comparatively low recall of the text. Interestingly, higher levels of mental stress were not found in the multitaskers compared to the non-multitaskers.  Too bad the researchers didn’t measure the stress response of a live person trying to talk to the multitasker!

The better solution. The next time you are tempted to multitask, consider simply focusing on your tasks sequentially and finishing one before moving on to another.  You’ll probably find that you get more done and enjoy your work more.

“I now know how much more quickly my goals can be accomplished by using a skilled coach. I was challenged in a way that was firm, but not aggressive or harsh, to think and peel back the onion. Thank you, Marie, for one of the most positive personal/professional experiences in my life.”
Katie Morey
Vice President, Ocean Spray Cranberries