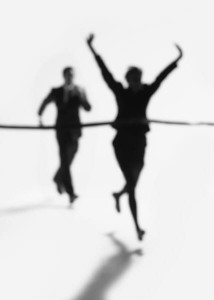 In the last two weeks, much has been made of a study that claims that women are better leaders than men.  In a Harvard Business Review blog post on March 15, 2012, the authors of the study, Jack Zenger and Joseph Folkman, wrote that women outperformed men in 12 of 16 leadership competencies, according to data gathered from 360 degree feedback surveys.  (click here for HBR 3/15/12 post)

I’ve worked for outstanding female AND male leaders.  (I’ve also worked for a few of each that had some pretty significant room for development.)  In my coaching practice, I coach both male and female leaders, and I’ve had the same experience.  I see many of the same issues and strengths from both men and women.

The data. None the less, the data is compelling.  On 36 of the 49 items that were surveyed, women outperformed men notably in areas relating to drive for results, initiative, communication, and relationships.  While men scored better than women in technical expertise, innovation, and strategic perspective, women scored better on leadership effectiveness overall.

The authors don’t offer an explanation for why women performed better overall in the study.  They do tell us is that the companies that the leaders worked for were ‘high performing’, however, they do not qualify or quantify that.  They also tell us that female leaders were outnumbered by male leaders by about two to one on average in these companies.  At the top of the organizations, the ratio was closer to five to one.  They conclude that if organizations put more women on their leadership teams, overall effectiveness would increase.

But I do have a concern that in our haste to sum up the qualities of a group, we may lose sight of the fact that leaders are individuals, each with their own strengths, blind spots, and beliefs that govern their behavior and ultimately, their effectiveness.

Each leader must be responsible for reflecting on their own experience and determining the growth and development they will commit to in the name of becoming their best leadership self.