Leading versus managing: Four things for leaders to let go of 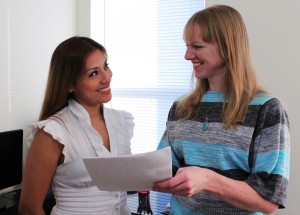 Last year, I wrote a blog post on eight key differences between managing and leading. I recently had occasion to think of these distinctions again when a coaching client asked me how a person could lead a large team without spending all their time in the details. She had nine people on her team, which is large but not too unwieldy, so I said that I supposed that it depended on whether she was trying to lead the team or manage it.

She understood the distinction right away and we had a great conversation about how to gradually transition a team that looks to its leader for all the answers to one that makes their own decisions and acts on those decisions appropriately.

When I went back to read my post from February of 2013, I realized that there were a few key things that managers had to let of if they wanted to be leaders:

Perfectionism:  If management is doing things right and leadership is doing the right things, leaders have to let go of perfectionism. Other people will NOT do things the same way that you would. But, if you are honest with yourself, there is seldom one perfect way. Letting go of your own image of perfection is a way to learn something new – and give others a chance to learn.

Need to tell:  Sometimes managers fall into the trap of feeling that they have to be the smartest people in the room. As a result, they spend all their time telling others what they know. Leaders avoid this trap and stay in learning mode by asking lots of great questions instead.

The compulsion to ease others’ burdens:  When you focus on leading rather than managing, others have to step up to make decisions and manage details. That can be scary for them. The leader mentioned above has an entirely capable employee who, despite years of experience, resists making decisions. For the short term, the leader decided to continue to retain responsibility for final decisions but to insist that the employee weigh in as an advisor. I’ve had some experience with this tactic and found that when employees see you base your decisions on their advice, they eventually become comfortable leaving you out of the process altogether.

Fear of ambiguity:  Leaders have to deal with a lot of ambiguity. It is inevitable and simply part of the role. When learning to be leaders, mangers will often revert to those managerial tasks that are familiar and comfortable, and thus avoid the ambiguity truly inherent in the leader’s role.

Much talk surrounds the issue of management versus leadership. In the end, managers must let go of management behaviors and needs in order to make room to take on the work of leaders.