Leaders, Get comfortable with ambiguity 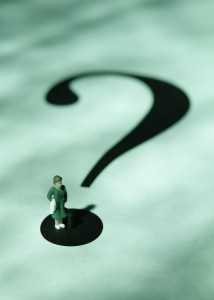 Sometimes when I work with leaders, they struggle with ambiguity.  They want all the facts before they make a decision.  They want to memorize a script before an important presentation.  They don’t want to take questions for fear of not having answers.

While I understand the urge to want to be certain, have all the facts, and be prepared, the problem with it is that leaders seldom have all the facts.  Things just move too fast.  And even if things slowed down a bit (that’s not going to happen) there are things that a leader is never going to know – how someone else might react for instance.

Not being able to cope with uncertainty paralyzes leaders.  It makes them appear indecisive at best and, worse, as inauthentic. While leaders sit and struggle with the ambiguity that is inherent is any leadership situation, the world moves on and opportunity is lost.

I coached a leader who, despite his fine reputation for being smart and committed, was also seen as a bit indecisive.  That frustrated him.  He wasn’t indecisive, he protested.  He was just careful and wanted to have all the facts before blurting out a position.  He had to get comfortable with the fact that he was never going to have all the facts and had a team and his own CEO who needed him to take a stand sooner than later.

Years ago I allowed someone on my team to convince me not to take questions when I held company information meetings.  We had a diverse group of employees from the warehouse to the administrative offices. You have no idea what some rabble-rouser will say, he reasoned.  You’ll get questions we can’t answer, he said.

I listened and that was dumb.  Yeah, whenever you stand up in front of a few hundred people and have no idea what they might say, there’s a lot of ambiguity.  And that can be scary.  But I missed a golden opportunity to really connect, to really communicate because, let’s face it, real communication is two-way.

Fortunately, I got over that and today, when I give presentations, I encourage both questions and comments, not just at the end but throughout.  I want to know what people are thinking, if what I am saying is resonating with them, and how they think they can (or cannot) apply it.

Yeah, I get a curve ball every once in a while – the person who swears that whatever I’m offering “just won’t work with the people that I have to deal with” – and I’ve learned to see it as a gift.  It tells me when, despite my efforts, I haven’t yet connected.  It gives me the opportunity, before it’s too late, to try again or to understand what about their position I have missed.

If you want to be a great leader, you’ve got to get comfortable with ambiguity.  Accept that you may not ever have all the facts or ever be able to read minds.  Otherwise, you risk being gripped by inertia and mediocrity.