Four easy ways to increase your interpersonal effectiveness in 2013. 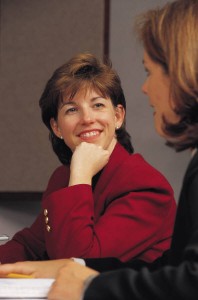 One of the most important skills that a successful leader depends upon is their own interpersonal effectiveness.  As the New Year gets underway, there are a few simple things that you can begin to do today to increase your effectiveness with co-workers, employees, and other leaders in your organization.

Smile.  Underrated as a tool for interpersonal effectiveness, the simple smile can release tension (both yours and others’).  It just puts people at ease.

Most of us smile as an involuntary response when we greet someone, but what about at other times?  What does your facial expression say to others when you are simply moving about the office?  If you’re deep in thought, others might misinterpret your facial expressions as displeasure or even anger.  Nobody wants to look like a grinning fool but when it’s appropriate, remember to smile.  That smile will go a long way.

Listen, and don’t interrupt.  At our core we all have a deep need to be heard.  Yet most of us don’t listen very well.  Often, while we wait patiently (or so we believe) for the other person to finish, we are thinking about what we’re going to say next.  Instead, the next time you have the opportunity to listen to someone, simply listen.  People are rarely given the gift of being listened to without interruption.  Be the person to bestow that gift and it will pay positive dividends in your relationships.

Show genuine interest.  Showing interest in other people is one way of investing in your relationships, but it’s got to be genuine.  One manager lamented that she’s been trying to show interest in people but that it doesn’t really help.  She went on to say what a waste of time such idle chitchat was when there was real work to be done.  The problem is that you just can’t fake it.  If you care about people and genuinely see value in connectedness, they will sense that.  If you are simply feigning interest in an attempt to manipulate them, they will sense that as well.

Acknowledge others.  If people crave being listened to, surely an equal number crave acknowledgment for their effort.  When people feel that their efforts are noticed, somehow it makes it all seem worthwhile.  When you are the person noticing and acknowledging them, it helps forge a connection.

Smile, listen and don’t interrupt, show genuine interest, and acknowledge others: Four things that you can begin to work on today to improve your interpersonal effectiveness in 2013.