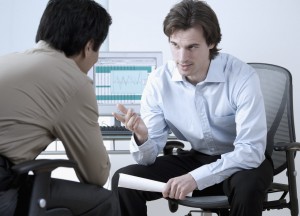 Recently, in talking with a leader, I asked her whether she was currently fulfilling her full potential on her team.  She answered honestly that she probably was not.  She wanted to but sometimes felt that communication on her executive team was hit or miss and she sometimes lacked a clear view of the big picture.  Often she was asked to do things without knowing the full context of the request.  Without the context, it was difficult to fully contribute.

How often do we as leaders do that, not only to our peers but, to the people that we lead?  We assume that they either know why we are asking them to do something, or worse, we assume that they don’t need to know.

Another ineffective tactic.  Sometimes we try to substitute detail for context.  Instead of saying ‘why’ we want something done, we simply provide minute detail for exactly ‘what’ we want and ‘how’ we want it.

Unfortunately, these command and control tactics often don’t render the results that leaders are looking for, especially when they are trying to effect change in their organization.

People simply resist.  Often, when staff is ordered to do something by decree, they simply dig in their heels.  More often, their actions are less overt.  They make a show of going along, but lacking a compelling reason to act, they undermine efforts in covert ways.  Attempts to overcome resistance by micromanaging bog down the process resulting in change that happens at an agonizingly slow pace, if at all.

Depriving yourself of others’ wisdom.  Even when others don’t resist unexplained directives in open or concealed ways, without sufficient context for what they are being asked to do, they are unable to contribute the kind of thinking that comes from truly understanding a problem and the intention of the solution.  You are deprived of their insight (which might tell you why your direction is ill-conceived or could be better implemented another way) and they are deprived of the opportunity to fully contribute.

The better approach.  The next time you are tempted to simply request that something be done (or worse, issue a mandate), consider presenting the vision of what you want to achieve instead. It’s okay to offer a request along with the big picture vision, but leave room for input from the recipient.

In doing so you will likely find that either: a) the person does a better job because they understand how their task fits into the bigger vision that you are trying to achieve, or b) that the task recipient shares information and expertise with you that causes you to revise or retract your request in favor of a better approach.